The Gentoo Installer project aims to create an widely extensible install engine that allows for a diverse set of attended and un-attended install options. All functionality will exist in the backend, exposed through a stable API. Planned front ends include text, gtk2, fully automated, and web-based interfaces.

This has been mentioned multiple times over the years, but was shot down by many on the Gentoo forums as defeating the whole purpose of Gentoo. Not really. It you use an installer, you still have to compile the packages and get to customize your system to the max.

I hope they follow through with a good release in the near future.

Microsoft Server 2005 to Run on Linux

In a marked departure from its earlier stand, Microsoft has promised to add Linux support for the first time in one of its products. Microsoft’s Server 2005 product will run on non-Windows machines, including Linux.

Microsoft had always rebuffed any requests for interoperability with products it didn’t make, particularly Linux, an open-source giant, which it has long considered a threatening alternative.

On Wednesday, Microsoft head Steve Ballmer promised to add Linux support to Virtual Server 2005 Service Pack 1, which will be shipped by the end of the year, because, he said, users need to manage heterogeneous networks.

I wonder how many copies will sell. I imagine the number to be quite small; what Linux user would buy a Microsoft product to run on their Linux server machine? Sounds like another way to get more money. If they make a tiny profit off of it, they will keep it. It also makes them sound good. “Hey, I hear Microsoft is not so competetive anymore. They are making stuff for Linux too.”

When is Office coming? Will Microsoft ever use the Linux kernel?

A while back, Microsoft said that it would remove the “temporary blocking mechanism,” which allowed users to opt-out of installing Windows XP Service Pack 2, on April 12th. From what was lead to believe by what I read, I assumed there would be no stopping the installation of SP2 besides turning automatic updates off entirely. I keep the updates on ( in fact, I received a minor patch today) and don’t keep any updates blocked. I have no received any mention of the updater attempting to download or install SP2.

So what happened April 12th?

P.S. I would try to see if it forced me to when installing updates using their online Windows Update, but it appears to be broken (in IE).

Adobe Systems Incorporated today announced immediate availability of Adobe Reader 7.0 for the Linux operating system. With the availability of the company’s universal client software for Linux, Adobe now supports the ability to reliably view and print content across all major operating systems in the enterprise. Combined with Adobe LiveCycle(tm) server software, Adobe Reader 7.0 for Linux lets individuals participate in business processes and interact with many types of content more securely, both on- and off-line, inside and outside the firewall.

“The rate of adoption of the Linux operating system among enterprises worldwide - especially among government and financial services organizations - is increasing,” said Eugene Lee, vice president of product marketing, Intelligent Documents Business Unit at Adobe. “Our customers were asking for Adobe Reader 7.0 on Linux as they begin to support core enterprise applications at the desktop. Today’s announcement helps our customers continue to improve their business processes and workflows with more comprehensive, multi-platform support for the Intelligent Document Platform.”

“Adobe Reader is one of the primary tools Novell Linux Desktop customers use to collaborate with Windows users,” said Ed Anderson, vice president of product marketing for Novell’s platforms group. “In addition to Novell’s extensive enterprise experience and Linux ecosystem, having enterprise software vendors like Adobe join Novell in supporting the Linux desktop will continue to expand the choices and capabilities the Linux community can offer enterprise customers.”

After a great week at the Masters, I’m home.

I went 6 out of 7 days, the most I have ever been and I probably had more fun watching this year than any other year that I remember.

On Sunday, I had a chair put down on 18 green for me. I managed to get a seat in the third row in the back of the green, which turned out to be an awesome spot and possibly the best spot on the green. There must have been over 30 rows behind me, so the third row is a great place to be.

I would had rather have Chris DiMarco win instead of another Tiger win, but there is always next year. In fact, I never want Tiger to win again; let’s see someone else who doesn’t have a bad attitude win. Nevertheless, I had a lot of fun and am rooting for Chris, Phil, and a few others next year.

I just received this e-mail:

Suprnovaforums.net has ceased to exist in name only, it is now called snarf-it.org forums and can be found at http://forum.snarf-it.org , all members accounts, posts etc etc are in tact and there, come and join us and check out the new buzz around the place!

Seems it’s true. I sucessfully logged into the forums. Upon going to http://snarf-it.org/, I arrived at a familiar site. It looks like Suprnova with a blue skin. Suprnova has returned, at least for a while.

Correct me if I’m wrong. I *think* suprnovaforums.net was the official one (even though it was suprnova.org), but I am not sure. I also don’t remember ever signing up for a bittorrent site using Clete2, but I tried an incorrect password and got in with the correct one, meaning it’s a valid site.

Yesterday, I had another chance to go to the Masters. I took some good pictures, but the best one is of a professional golfer hitting out of the bunker. (I can’t remember who he is) 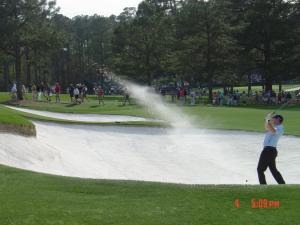 P.S. This means I won’t be posting much this week.

Google Gulp and Your Privacy
From time to time, in order to improve Google Gulp’s usefulness for our users, Google Gulp will send packets of data related to your usage of this product from a wireless transmitter embedded in the base of your Google Gulp bottle to the GulpPlex(tm), a heavily guarded, massively parallel server farm whose location is known only to Eric Schmidt, who carries its GPS coordinates on a 64-bit-encrypted smart card locked in a stainless-steel briefcase handcuffed to his right wrist. No personally identifiable information of any kind related to your consumption of Google Gulp or any other current or future Google Foods product will ever be given, sold, bartered, auctioned off, tossed into a late-night poker pot, or otherwise transferred in any way to any untrustworthy third party, ever, we swear. See our Privacy Policy.