A few days ago, I saw a new posting about eBay discontinuing allowing people to login VIA Microsoft’s Passport (basically, it was supposed to be a universal login system) and I wondered if eBay had become fed up with Microsoft.

Now, I hear, that Microsoft is dropping it completely. Looks like eBay was the major one to collapse it.

“As for major merchants, they were concerned about letting Microsoft stand between them and their customers. They feared the company that controlled more than 90 percent of the world’s desktop computers might one day charge a toll on e-commerce transactions.

In the end, old-fashioned competition may have doomed Passport. ”

Merry Christmas to all!

I’m going back to play, but here’s an almost-full list of what I got:

Wireless keyboard and mouse combination, remote control robot, uv blue clear computer case, deoderant stuff lol (my mom’s like “YOU STINK… just kidding”), a set of recordable CDs, Sid Meier’s Pirates!, RollerCoaster Tycoon 3, Metroid Prime 2: Echoes, Paper Mario: The Thousand Year Door, Tetris Tower 3D, candy, and some of those weird shaped balloon kits (um, you know, the ones you make stuff out of). Oh and I got a football, binoculars, a calendar, a pennant (CLEMSON!!!), and a new GameCube controler (cool clear blue). I also got a NICE wallet

Forgot about the Clemson socks.

I got much more than I asked for and everything that I asked for except for World of Warcraft, which I plan on getting in a few months. Yay! It’s been an awesome Christmas

If you want, you can check out pictures (sorry, kind of blurry) of the case, mouse, and keyboard here. (they keyboard is ultra silent, too)

More when I get it or when it ships. Stupid backorder…

Edit: By the way, I am better than SOMEONE SOMETIMES (hah sometimes) at Halo 2 on Xbox (you know who you are and you will most likely never read this

Well, tonight, we convinced our parents (yes, I am young

) to let us open one Christmas present early.

So, anyways, I opened up a present with RollerCoaster Tycoon 3 and Paper Mario: The Thousand Year Door in it

Ok, I have my article back.

Well, I have had a lot of mentions about SP2 lately, so I just decided to blog about it.

It’s one of the most useless patches that Microsoft has released. My reasons are that the only thing that I truely liked about it was the fact that the booting bar changed from green to blue (blue fanatic here). Other than that, all of the "improvements" are aimed at your average “Joe” (I really do pity people who are named Joe and have this unfair discrimination against them… I wonder what the original Joe was like…).

First of all, yes, the blue bar is cool, but it was already blue in the Professional edition of XP. Second is that they finally added a popup blocker to Internet Explorer. This was much needed and desired by most, but they had to mess it up.

Going to the Apple website to download the iPod updater software fails, because Internet Explorer blocked a popup and a "potentially dangerous" download. So, you think to yourself, no problem, I think I will tell it to ignore this one. Ok, so you click ignore this one. Internet Explorer then reloads the page, but nobody at Microsoft though to implement the neat feature that resends the post data. Oops. (e.g. it doesn’t work)

Well, so maybe that idea failed, but surely enabling the firewall by default is good, well, for some. Not for me or about 75% of my friends. So, you then again tell yourself, I will diable it. Ahh! What’s that? There’s a new icon in the taskbar warning you that the firewall is off. No problem yet again, you will disable the icon and get on with your life. Oops, can’t get rid of the icon. In fact, after toying around a bit, you figure out that you cannot disable an antivirus program either, nor can you disable automatic updates, without, of course, getting the icon in your taskbar.

So, it’s not that bad, you don’t mind an icon in the taskbar (well, apparently, you aren’t me

. So what else if icons don’t annoy you? Well, you have wasted 160MB of disk space (in our day, it usually means nothing, especially to those of us who have 250GB hard drives) and boot time is increased dramatically. In fact, some people (sorry, can’t remember how much it added to mine, but this is about accurate) report that their boot time increased by 14 seconds. Amazing.

And if you hold the position of that Service Pack 2 has less security holes, just remember that you can get the same patches for SP2 as for SP1. Also, you may recall that Microsoft is notorious for creating many, many new bugs when adding a small amount of new features.

Not that bad? I suggest that you try it out yourself if you feel so obliged, make your opinion, and let me know about it. Honestly, I am interested in what you think.

By the way, this post was not meant to offend or show a heavy bias. I have fully tested SP2 and people have backed me up in my opinions who are not aligned with Linux as I am. I’m running Gentoo Linux dual booted with Windows XP SP1.

I have to boot twice into Windows before it actually boots. First time, it just sits there with a blank screen. I reboot and it works. Weird.

Also, try and think of Windows XP SP2 from a marketing standpoint. We have already determined it is mostly useless. So what is it good for? Marketing. Maybe someone was sick and tired of Windows. SP2 came out and they said “hold up a minute, they fixed it all!” Then, maybe even a few *NIX users thought “hmm, looks like they fixed something” and reinstalled XP.

It is the ultimate strategy. Microsoft may be corrupt, but they are not stupid.

Here’s the best and longest conclusion:

Do you want Service Pack 2? No.

Didn’t take them nearly as long as it did to get 2.0 out. Glad to hear that all is going well with the development team, not like I had heard anything otherwise. Linux binaries and source are all that is avaliable for now.

Not in portage yet… gimp search.

Well, sadly, today, we have lost SuprNova.org and TorrentBits.org, two of the largest and best torrent trackers out there. Is Demonoid next?

It helped me to advertise for a game (DarkSpace), an MMORPG space fighting game, as well as give me Halo back, where my CD was messed up.

Uh-oh, demonoid is down. Hopefully it’s related to the problems they have had lately.

If you are reading this, look up on the page

. I have posted the article here.

This article is exclusive to Great Big Blog, check it out here.

It clocks in at 572 words and I think is worth the read (well, that is, with my 2AM brain switched on).

Ok, so Alex removed it from the database. Stay tuned, I will get a copy from Nathan and post it here only.

I would have appreciated it if… Alex… would have given me a copy by e-mail or something instead of just placing it for trash. Good thing Nathan was smart and set a deleted flag to 1 instead of fully pruning.

Oh well, staff hates me, not my fault.

Stay tuned, I have the article and am fixing a few mistakes in it.

Microsoft to Charge for Spyware Removal

In a shift from past practice, the world’s largest software manufacturer said it may charge consumers for future versions of the new protective technology, which Microsoft acquired by buying a small New York software firm. Terms of the sale of Giant Company Software Inc. weren’t disclosed.

Spyware is a category of irritating programs that secretly monitor the online activities of Internet users and can cause sluggish computer performance or popup ads.

Sounds to me like Microsoft is running out of income for the moment. Think about it a minute.

Most people who have switched to Windows XP have already switched. Microsoft dove into the console market with Xbox, where it is losing money. Microsoft went into office, where it is losing market share slowly, while still maintaining over 90% of the market share. Microsoft is into almost all they can get their hands on and have dominated everything (I will save my near-monopoly speech for a later time) that they touched. They need something new, something to sell, something that will make money for them.

Enter spyware into the factor. Since they already have a much market share in the other businesses they are into (as in, they won’t gain market share, the only way to go is down), they need to sell something new. Much, much later on (after the evil Palladium or Next Generation Secure Computing Base or whatever they plan to call it later on is implemented), something will happen to Microsoft, which will either be a fall that causes them to charge per month on the use of their operating system or they do it without that.

There is also the theory of Microsoft purposefully putting in bugs and implementing ActiveX just so that they can do this sort of thing later. They may be extremely corrupt, but not that corrupt. Maybe later, but as of now, their code is beyond repair, it is their fault (almost anyone will agree), but they didn’t do it on purpose.

Yes, this was published and written after 1:30AM EST.

Here we go with my Windows screenshot. Nobody wants the Windows wallpaper, as it’s ugly and really only applies to me. If you want to see it without icons, check out my “I Am Cool” post. 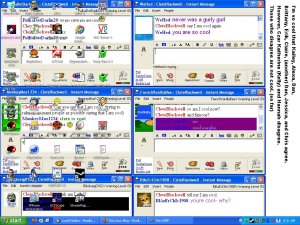 By the way, on the Linux one, I am using a wallpaper (e-mail me if you want it, I am too lazy at the moment) that isn’t found in many places. The plastik theme is pre-loaded into KDE. The superkaramba themes are all found on kde-look.org. 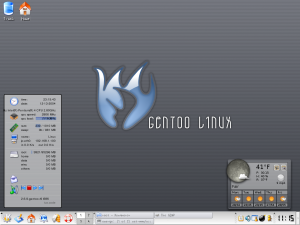 Weird (clickable as well) (and no, the server was using default gravity and such; I minimized the game and came back and it was like that, weird): 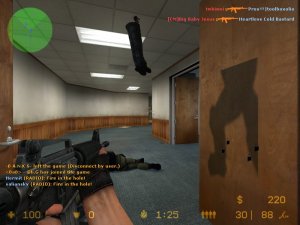