I managed to capture most of it on video (low quality, high is too large in size).

Video. (For best results, run in a non-browser-integrated viewer so it blows up a bit)

His competitor wagered $4,401, when she answered “What is H&R Block?”, she put herself ahead by $1. Ken missed the question, asking “What is Fed-Ex?”

Alex Trebek: “The category is Business and Industry and here is the clue, ladies and gentlemen: Most of this firm’s 70,000 seasonal white-collar employees work only four months a year. You have 30 seconds. Good luck.”

Ken won over $2.5 million US Dollars on Jepardy.

Well, I must say that I highly doubted we would get Half-Life multiplayer (I figured they would stick to Counter-Strike), but I am apparently wrong.

There is a new Steam news bulliten.

What leads to the deathmatch conclusion is the name of the image (of course, the contents of the image too) “HL2DM.jpg”

If you can’t get to that (quite slow for me too), here’s the contents of the announcement: 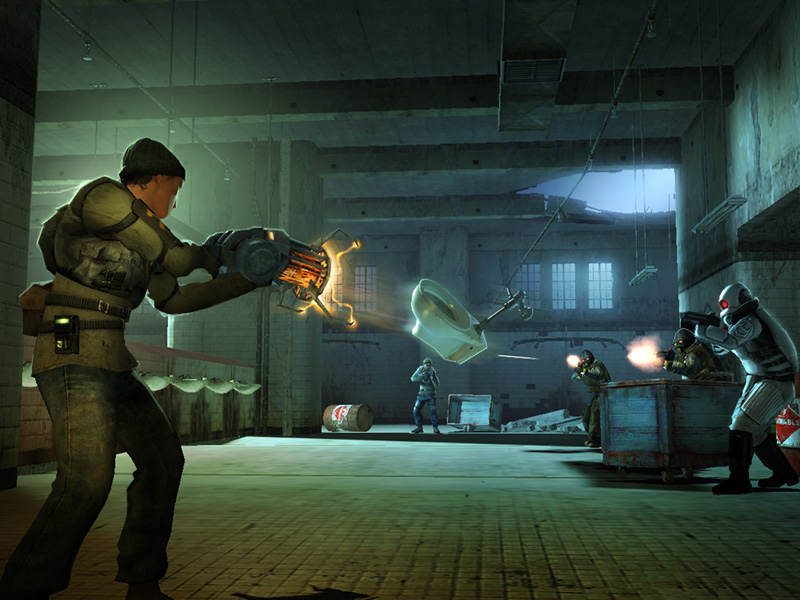 About a month and a half ago, I noticed a thread at the Afterdawn.com forums where SuperTed is attempting to burn ripped GameCube images. Quite legal if you own the game, just another type of backup. I will continue to follow up on this thread.

As of today, (I assume his name is as such from his username ‘SuperTed’) Ted has made a small step in getting it to work properly and has the screen which shows what game is inserted telling him the game name is “@# ‘!”" (forget the first and last quotes).

What has been done is writing a mini DVD-R (of a certain brand, not sure which he stuck to) with a certain burner. The image of the GameCube disc, which was read off of the GameCube (using the PSO Load method (http://gcdev.net/ or .com or .org, can’t remember)), is also backwards. (this is due to the disc spinning ‘backwards’) So, the image is reversed byte-by-byte using an application and then burned to a DVD-R.

Check out the thread.

Still seems to me like stabbing in the dark, but we are getting closer.

I read a good deal of it and was equally surprised with the writer how horribly EXT3 performed on many tests. I’m not quite as surprised as the author that many large distributions use EXT3 by default (SuSE, Red Hat, Fedora (Red Hat or Fedora don’t even have Reiser FS options), Mandrake, College Linux, Debian, etc.), as it is said to be much more stable (and is older) than the other main filesystems.

TORONTO - Individuals who share personal copies of music files on the internet are safe after a Federal Court rejected a motion on Wednesday that would have allowed the music industry to sue them.

I won’t say much here, but I think it’s a step in the wrong direction for the Canadians out there. We could be next (USA), but I’m hoping not. Of course, it will probably be challenged again or something.

By the way, I understand it’s quite an old article, but it’s new news to me.

Amazing. Wow. I won’t give any spoilers, but we all know there will be a Half-Life 3. I can’t wait.

Also, VALVe will be releasing the SDK next week along with a surprise. My guess besides the patch for the stuttering, we will get some models for Counter-Strike: Source and some maps (I’m hoping for cs_assault).

NO Connection in Steam Status to Patch Release

I’m sick and tired of the majority of people talking about the Steam server status.

Many people are talking about a ‘drop’ on the bandwidth numbers right before a patch is released. This is nonsense. There is NO connection between bandwidth and when VALVe decides to release a patch. The only way there would be is if VALVe shut the servers down before applying the patch, which they do not do.

What do you think people will do? Nobody knows when a patch will come out for a game, so what do they do? They get some kind of ’sign’ from the all-knowing Gabe Newell (founder of VALVe)? Sure, let’s believe that, so they all sign off of steam just to make the bandwidth page register a dip in the amount of bandwidth. Insane.

Thanks, no connection, move along. Rant alert. Stupid community (well, in some aspects).

Apparently, I have the John C. Dvorak disease. (he uses a lot of bold when his articles are printed in PC Magazine)

Half-Life 2 Overhyped in a Different Way?

Previously, I posted about Halo 2 being overhyped.

Now, I’m posting the other side. Half-Life 2 was overhyped by some.

This isn’t in the same way as Halo 2, which was mainly the complaints as follow. The game engine was horribly optimized for the computer. You can’t get the graphics engine to render anything anywhere near 30fps for anything on the source engine at full details.

The way that Half-Life 2 was overhyped was simple. People expected it to be twice as good as the next best game out there (assuming it’s the best game out there, which it is to me). People saw the E3 2004 (or 2003, not as impressive, but close) videos. They followed all the rumors (wow, what a ride). They stayed up all night (3AM EST) just to play the game after wiping their hard drive clean, defragging, jumped 2 and 1/2 times, screamed a high F#, and tapping the letters “WOOT OMG OMG OMG” 3 times.

Mainly, the problem with the E3 2004 videos being released was that they are no more and no less than proof of concept videos. There are no guarantees that anything you see in them (and they weren’t meant to be publicized the way they were), not even the physics or the gun the player was using. People became disappointed when a few scenes never happened in the game.

The leak of the beta version was a fall for many, as they downloaded the workable compiled version and played it. They spoiled much of the story, thought it was supposed to be different, etc.

Many rumors were abroad about the ending, when it would be released, what guns you would have (according to the beta; from what I hear, some were added and some removed), what levels you would play (ditto), and more nonsense of the such.

People were upset that the game didn’t finish off the series (actually, not many people were, but this is yet another point). Hopefully, they won’t fool around and will get right to work on Half-Life 3, which many people are already talking about.

Basically, the more you followed Half-Life 2 and the ups and downs, the more you were disappointed. Personally, I followed it closely, but not too close. I have yet to finish the game, but it’s the best FPS (First Person Shooter) game I’ve ever played. I’m loving every minute of it.

Several major Linux vendors have warned they are vulnerable to four flaws in a widely used IMAP e-mail server from Carnegie Mellon University’s Cyrus Electronic Mail Project. The flaws could allow an attacker to take over a server.

Among the Linux vendors issuing patches for the Cyrus IMAP server are MandrakeSoft, Gentoo and Debian. IMAP (Internet Message Access Protocol) is one of the most popular standards for accessing e-mail, and the Cyrus software is designed for use by small to large enterprises.

This is just one reminder that there are vunerabilities in all operating systems, not just Windows.

Despite all the hype about Linux and other open-source operating systems, the fact remains that Microsoft Corp. continues to dominate the desktop universe, with 90 percent or so of the world’s personal computers powered by one version of Windows or another.

No one is predicting an end to Redmond’s desktop dominance any time soon. But there are signs on the horizon that open-source systems could eventually claim a big chunk of the PC market. From today’s news: Long-time Microsoft partner Intel Corp. is working to help Asian PC manufacturers install Linux on new machines rolling off the assembly lines.

Interesting. Intel is now supporting Linux. Now, we have two main contributors. IBM and Intel. Things are on the up for Linux and down for Microsoft. I’m predicting that Longhorn will be a step backwards for Microsoft with their ‘Next Generation Secure Computing Base’ system coming up dubbed Palladium by most. I will have more on it later on.