This is going to be a short part 3, but a good one.

For a long time, I have known about prelinking, but I never actually tried it. Prelinking can be reversed at any time and is relatively painless. Prelinking works by taking the files that are normally linked and adding them to the executables. The tutorial, which is linked below, boasts a 50% loading speed increase in KDE with prelinking as opposed to without it. I can give testimony of prelinking working, but I’m not quite sure that it sliced off half of the loading time. Prelinking does not change the operating speed of a program, just streamlines the loading process.

Starting off, install prelink. For Gentoo users, simply emerge prelink. Other users may find a link from this page (as well as a better explination than I could conjure up of how it works).

Next, you will need to run env-update, which will create a file that tells prelink which folders to scan when performing its job.

Normally, /opt is full of pre-compiled applications that cannot be prelinked. You will also get quite a few errors when trying to do this, so exclude those by adding PRELINK_PATH_MASK=”/opt” to /etc/env.d/60prelink.

Now you are ready to “prelink -amR.”

After you are finished, just add KDE_IS_PRELINKED=”true” to /etc/env.d/99kde-env, which tells KDE that it has been prelinked.

For more detailed instructions and common problem solving, look over the tutorial from the Gentoo documentation.

This release has had a few setbacks including a complete security rebuild, but with the help of the many teams within the Gentoo developer community, we believe that this release will be one of the best that we have ever had.

This release includes new installation media from Alpha, AMD64, PPC, PPC64, SPARC, and x86 and includes stages for IA64 and SPARC32. Please check out our mirrors to find the closest one to you. As with 2004.3, you will be able to download optimized PackageCD images for x86 and PPC via our bittorrent server, and also our “unofficial” secondary bittorrent server, provided by Friends of Gentoo e.V. in Germany.

No offense to them, but it doesn’t seem too hard to build a new CD. They did do a “complete security rebuild,” but other than that, every version is pretty much the same. Each one just has newer packages. All you have to do is do what you did last time. Just recompile. Mostly, it seems to be publicity.

Sorry about the week-long delay.

Here are the screenshots that I put together last week, but didn’t have time to post. I intended on getting more. 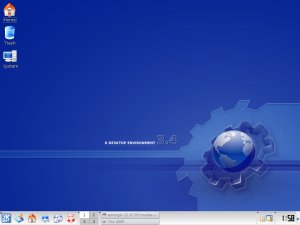 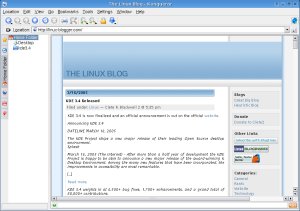 Cool new effects when rolling over items in the taskbar: 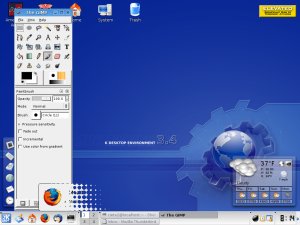 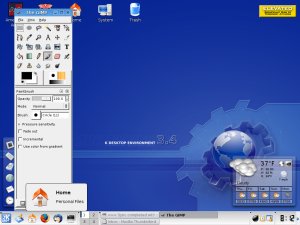 More to come later. Right now, I am catching up on e-mail and such.

Here is my new Linux screenshot for March: 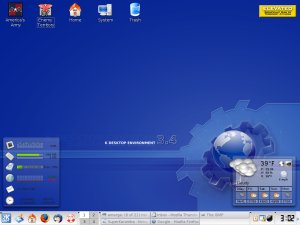 Here is one with a few windows open: 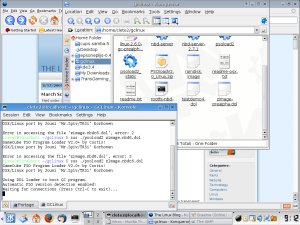 KDE 3.4 screenshots coming soon. So far, I like it a lot.

If anyone has any clue where I can get a karamba (or superkaramba) theme that is a transparent console, please let me know.

KDE 3.4 is now finalized and an official announcement is out on the official website.

March 16, 2005 (The Internet) - After more than a half year of development the KDE Project is happy to be able to announce a new major release of the award-winning K Desktop Environment. Among the many new features that have been incorporated, the improvements in accessibility are most remarkable.

By the way, for you Gentoo users, it is already unmasked in portage and the builds are ready to download. The server I’m downloading from (just so happens that a whole bunch of servers denied me, so it’s kde.org) is hit. I’m getting 4KB/sec.

Screenshots and my thoughts on it tomorrow or some other time. I’m going to be trying, for the first time, kde-meta, which should install a much larger base of packages.

For those of you who do not read Slashdot, here is a piece of news for you:

The entire realm of open-source software could get a performance boost if all goes well with a plan to overhaul a crucial programming tool called GCC.

Almost all open-source software is built with GCC, a compiler that converts a program’s source code–the commands written by humans in high-level languages such as C–into the binary instructions a computer understands. The forthcoming GCC 4.0 includes a new foundation that will allow that translation to become more sophisticated, said Mark Mitchell, the GCC 4 release manager and “chief sourcerer” of a small company called CodeSourcery.

“The primary purpose of 4.0 was to build an optimization infrastructure that would allow the compiler to generate much better code,” Mitchell said.

For example, the current version of GCC can optimize small, local parts of a program. But one new optimization, called scalar replacement and aggregates, lets GCC find data structures that span a larger amount of source code. GCC then can break those objects apart so that object components can be stored directly in fast on-chip memory rather than in sluggish main memory.

Interesting. GCC 4.0 also introduces a feature called “Mudflap,” which allows developers to check for buffer overruns. It slows the program down considerably, but is expected to be turned off in final builds. Some programs are noted to run “shockingly faster” when compiled using GCC 4.0 versus other versions of GCC.

Now for something I didn’t know:

Previously, I thought that GCC only compiled programs in C, C++, and the like. You can spend years working with Linux and not know what your compiler is capable of doing.

Now if only KDE 4.0 would come out a little faster.

I hope they improved Konqueror. Right now, it doesn’t hold a candle to what Internet Explorer or Firefox can do.

For the moment, I’m emerging 62 updates. I have my nightly emerge on, but I have set my computer not to come on (it misses the cron job). I’m trying to get it all done so that I won’t be overwhelmed with the KDE release. Fun stuff.

This is our final in-depth look at the upcoming player-versus-player systems planned for World of Warcraft, and it deals with the new Honor System and Rewards. When these systems are deployed, there will be many more incentives for players to fight each other than just the thrill of the kill. And honorable PvP players will receive just rewards for fighting players that are of appropriate levels. We’re in the midst of testing these systems, but there is already a lot that we can share with you.

As we have mentioned before, when you kill other players or aggressive PvP-enabled non-player characters (NPCs) in your level range, you will receive an honorable kill. All your honorable kills for a week are then calculated to give you an honor score for that week, which then translates into an honor ranking. This honor ranking carries with it titles and material rewards, and eventually, officer status and other perks.

After this post, I am limiting the amount of gaming content on The Linux Blog. If you would like to read my gaming posts (some will be here, but not many), please check out my profile on Great Big Blog.

* UML updates
* fbdev updates
* nfs4 server updates
* new megaraid driver, new iscsi driver, fatfs update, fbdev updates, kitchen sink.
* The below description of what has been added and what has been merged is probably a bit more inaccurate than usual due to my having shuffled things around and confusing myself.
* I dropped the list-of-all-patches from this email due to it being rather long. The unexpurgated version is at ftp://ftp.kernel.org/pub/linux/kernel/people/akpm/patches/2.6/2.6.11/2.6.11-mm2/announce.txt

While chatting over dinner with the executives of a middleware company during the recent RSA conference for encryption and security in San Francisco, I heard about a secret project. It concerned the development of a version of Linux that runs smoothly as a task under Windows. The project was completed and then shelved. Whether it will ever reemerge is doubtful, but it does offer some interesting possibilities and hints as to what Microsoft may be up to with MS-Linux.

The immediate usefulness of Linux running under Windows is obvious. You can use all the Windows drivers for all the peripherals that don’t run under Linux. Drivers have always been an issue with Linux as PC users have gotten spoiled with Windows driver support. Today’s user wants to grab just about anything and not worry about installing it and making it work.

If you know me well, the first thing I do when new issues of PC Magazine arrive in my mailbox is flip to the Dvorak section. I love John’s articles.